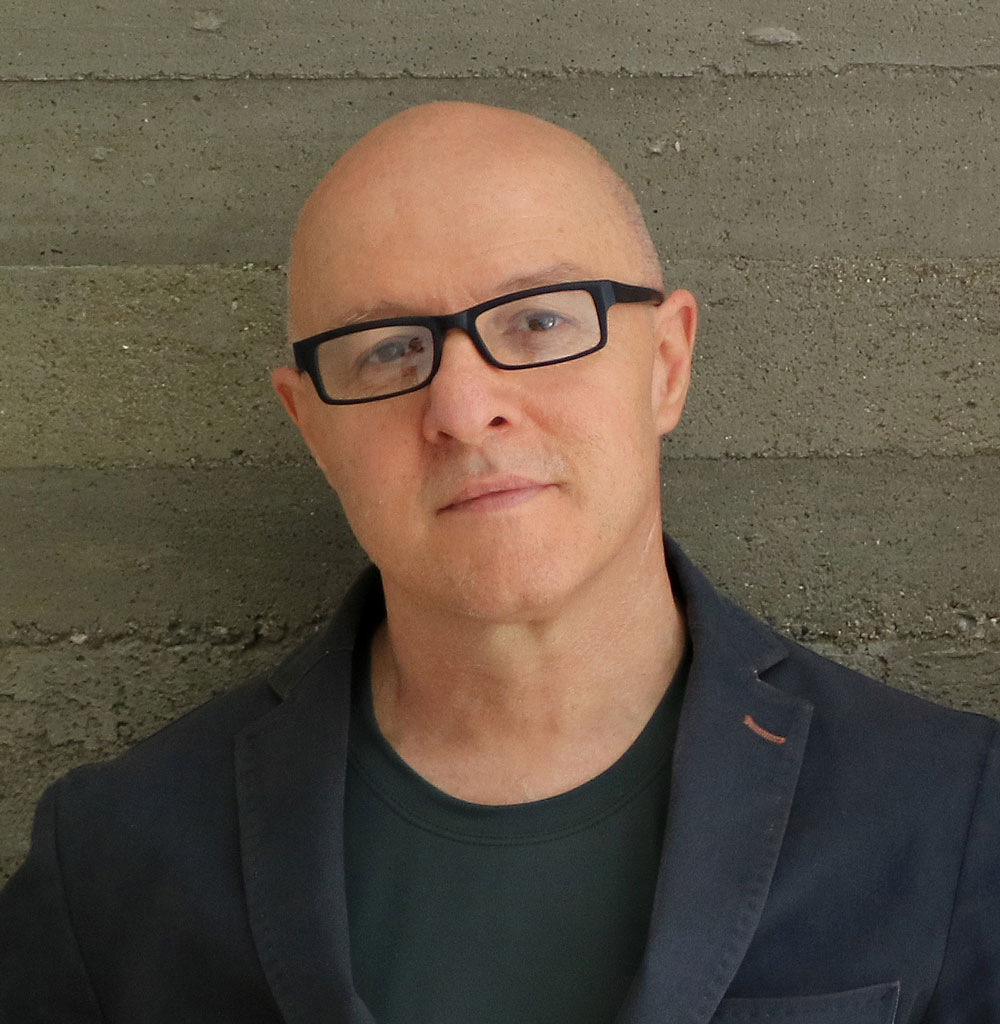 Coordinator of the Master in Architectural Design

Francisco Spadoni is an associate professor at FAU University of São Paulo and currently the coordinator of the Master and Ph.D. in Architectural Design. He is an architect from PUCC Brazil, Ph.D. from FAU USP and CEAA from Paris-Villemin with Architectural Association. As an architect, he worked at Kenzo Tange’s Studio in Paris, before founding Spadoni AA Studio in São Paulo. Francisco has participated as a professor and lecturer at institutions such as FAU Mackenzie, São Paulo; IUAV, Venice; UQAM, Montreal; UBA, Buenos Aires; Politecnico di Milano; Azrieli School, Ottawa among others. His work has been recognized in several competitions and awards, high-lighting: Olympic Port, Rio de Janeiro, 2011; SESC Cultural Center, São Paulo 2014-2020; Paula Souza Center 2014, APCA Prize (Art Critics Association of São Paulo) and WAF (World Architecture Festival) 2016 for Hyundai Urban Pavilion. It also stands out the workshops: Isola Nascosta’s First Prize at the IUAV WAVe 2011, Coffee Pavilion at EXPO 2015, and Landscape of Work presented at Venice Biennale 2018.

The USP’s Master in Architectural Design program, led by Professor Spadoni was selected in our BAM Ranking 2020 as the 22nd best postgraduate architecture program in the world.

We hope you enjoy the interview that Prof. Spadoni kindly completed exclusively for the BAM platform.

1.- Please describe the beginning of your professional/academic career within the Universidade de São Paulo. What would you like to highlight about its FAU?

I began my career in 2005 as a professor at FAU – School of Architecture and Urbanism at the University of São Paulo. I am from a generation of professors who replaced the retiring historical ones that marked Brazilian Architecture, Paulo Mendes da Rocha, Joaquim Guedes, among others. My relationship with the university started many years before, however, having studied there for my Master’s degree and Ph.D., graduating in 2004. I have also worked at other universities teaching architectural design and theory, so teaching is something I have developed in parallel with my career as an architect.

FAU represents an inflection in the teaching of Architecture in Brazil, specially from the teaching proposed by João Vilanova Artigas in the early 1960s, whose main trait was the transversality between areas that constitute the education in Architecture. This pluralistic vision of teaching, permeated by humanism and the appreciation of knowledges, walked alongside the strengthening of modern Brazilian project, started in the 1930s in Rio De Janeiro, and during this period established a genuine school of Architecture in São Paulo, founded on the essential space as well as on know-how in building. The first modern Brazilian movement led to the award of the Pritker Prize to Oscar Niemeyer in 1988 and the second to Paulo Mendes da Rocha in 2006. The FAU building, designed by Vilanova Artigas, is a landmark of this second movement and is considered one of the most beautiful educational buildings ever built.

Architecture is one of a few areas of knowledge built on this continuous questioning: what do we want our education to be? That’s why it is always current. Doing Architecture means giving answers to your time because building means edifying the present. It speaks to the man who is here and will live in it, in the buildings or the cities designed. The present, however, is long-lasting because matter tends to outlast bodies, and naturally, what is created today will also be part of some future. This gives us freedom regarding the future, but it is also an enormous responsibility because everything we do will impact on future generations. For example, if we consider that each human being represents 9 tons of excavated global material every year, we can assume that the mountains being taken down in order to provide the iron and minerals to build our cities will create an ecological disaster in just a few years. I hope that the regard to the future will consider these questions. In a complementary way, Architecture has always fed from the contribution and conflict with other disciplines and areas of knowledge so I can understand that this transversality will have to be increasingly part of its repertoire and teaching. This is how I see the Academy

“Doing Architecture means giving answers to your time because building means edifying the present. It speaks to the man who is here and will live in it, in the buildings or the cities designed”

3.- Given the current situation of the world regarding COVID-19, how do you think it will affect the Architecture education in the near future?

COVID-19 is a humanitarian tragedy whose impact on society is still unfathomable. In terms of education, I think the biggest concern is much more the loss of the experience of social proximity than the technological difficulties of remote teaching. Teaching Architecture, in particular, has something medieval in the building of knowledge i.e., the teacher and students work on problems built-in four hands, whether on a sheet of paper or the computer screen, and this work has always implied on proximity. The COVID-19 experience generated a rupture which still has not been digested by teaching, the non-presence. Still, it is possible to imagine that alongside the difficulties, there will be achievements that would have been inevitable in the near future – such as the potentiation of the available technology that we have never experimented with on such scale. One of the characteristics of Architecture education is to be experimental.

4.- Which are the main characteristics that a good Architecture professor should meet? What’s your academic vision as a teacher?

First, we need to define what we understand by an Architecture professor since the teaching practice is different in theoretical, technical and creative areas. I could say that in all of these it should not be about an idea of transmission but about facilitating the access to knowledge and to the structure of thought. Good teaching should be an exchange process where we learn more than we teach. I can talk about creative practices, training design and urbanism, which are my main areas. I usually say that when teaching design, sometimes the professor designs, but other times the architect teaches. Both parties should have good listeners.

“In terms of education, I think the biggest concern is much more the loss of the experience of social proximity than the technological difficulties of remote teaching”

5.- Which advice would you give to someone who just finished her/his postgraduate studies and wants to become a competitive professional in Architecture?

Architecture is a complex practice that requires a sound education coupled with a mind that is willing to take risks. Architecture is a slow-moving career. Be patient. Competitiveness, in my view, begins with competence. The rest is a struggle for opportunities.

6.- Could you suggest another School of Architecture or country where you would like to teach? Tell us why

There are many excellent schools and each of them has their respective contexts. I have been to several as a student and as a professor and my education comprises each of these experiences. I would go back to them all. I am open to challenges.

7.- Who are you admiring in Architecture Academy? Who do you usually see as a reference?

I could make an extensive list. I particularly admire architects who seek to build their professional career alongside an academic one as teaching and reflection. Staying within the classics and quoting just a few: Bauhaus and its directors; the Italian architects from the Tendenza group; the North Americans from IAU/Opposition; and the Brazilians from the School of São Paulo.

8.- How do you start your creative processes when you begin a new project?

That isn’t easy to answer. Practicing Architecture is having the courage to take risks. Every work has a distinct problem, so the beginnings will also be so. It is the best part of the project. Designing is a collective activity, but I could suggest that I look for a crucial problem, and I build the idea from that. This problem could be in the Program, the context, the technology, wherever, and from there, we associate the concepts based on an exhaustive evaluation of data. From an operational perspective, whenever the work allows, I work with paper models, using waste material. It is a concrete exercise that brings me closer to the thought of form and space.

9.- What’s your academic vision at the Master in Architectural Design at USP?

The Master in Architecture and Urbanism at FAUUSP is the oldest and most prestigious graduate program in Brazil, having started in 1972. Currently, the Program is composed of eight research areas, among them Architectural Design. The Program is based on three research lines: Design: production and research; Architecture and the city, and Design: Theory and Method, each one seeking to achieve the idea of design as a privileged research field in Architecture. Another characteristic to be highlighted that reflects FAU’s teaching concept is the commitment to an integration of all areas of knowledge, something that is done since the undergraduate Program and shapes a diverse student with strong social and cultural views. The Program is also known for the quality of its faculty members who are all PhDs as well as architects with professional expertise. Since 1980, the Master shares the same academic structure and professors with the Ph.D. Program.

10.- What do you think architects can do to face a crisis like the one we are experiencing in present times?

During emergencies, the experience of architects has been fundamental in operations that involve adapting existing locations for medical and health use as well as in proposing new specialized sites relating to the pandemic, including the creation of objects. We must also consider that the crisis will last much longer and that the human activities will have to gradually return to safe environments, which implies expertise in creating and managing spaces. Architects are the aptest professionals to develop those. It is quite likely that the COVID-19 experience and its social consequences, which are tragic, could lead to new parameters when thinking about new spaces and social living. Architects can be part of the dialogue under these new conditions.

“It is quite likely that the COVID-19 experience and its social consequences, which are tragic, could lead to new parameters when thinking about new spaces and social living.”

The BAM Team appreciates the time Professor Spadoni dedicated to complete our interview and we invite you to learn more about his professional and academic work at the  Universidade de São Paulo by visiting the following links.